Arthurian Airsoft has released the ‘Excalibur’ range of AEGs with something for every player. The Excalibur AEGs are all full metal construction with numerous styles of external parts to compliment and individualise every variant. 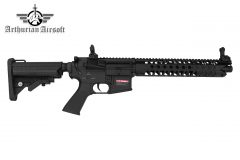 The front rail system on the Glatisant looks truly evil. Named from the 'Questing beast' or 'Glatisant beast' from Arthurian mythology, with the head and neck of a snake and the body of a Leopard. The very front of the rail has a fang-like loo [...] 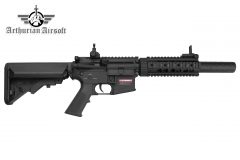 The Excalibur Recon front end has a full, four-sided 20mm RIS rail ready to fit any attachment on. There are 'T', 'B', 'L' & 'R' numbered markings for the top, bottom, left and right rails. The outer barrel is only 4" long and has an integ [...] 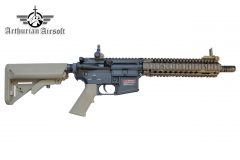 The rail system for the Excalibur Mark 18 is based off the Daniel Defense 'CQBR' and dubbed as the MK18. It is a free float rail system painted in a lovely looking bronze colour and is 9.5" in length giving you plenty of rail space for attachm [...] 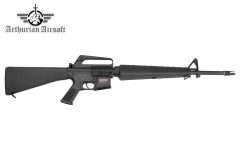 Based off the original Colt M16, this model is one not often seen on the market due to some very small details included with this model, but they make a difference to re-enactors and enthusiasts. The front end of the Veteran has the classic tr [...] 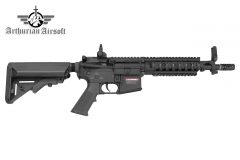 The Excalibur Knight is equipped with a 7" 20mm RIS rail system capable of attaching any 20mm accessories. With plenty of rail space and the relatively short front end, the Knight is perfect for CQB. The mock gas block at the front not only ac [...]

All Arthurian airsoft weapons are tested at factory as well as in the UK allowing all weapons to be fully functioning out of the box with a full test report so you know your power before entering the field.

Full set of spares and replacement parts are available if you damage your  pride and joy even if not covered by warranty we have parts to get you back on the field.

Unable to find a dealer? Drop us a message with your location and we will be able to provide a fully authorised dealer for your purchase.